Nice Carnival King of the Cinema

Back in images on the very successful 135th edition of the carnival 2019 on the theme of cinema. A selection of photos and a slide show of flower battles, nocturnal corso and carnival corso. 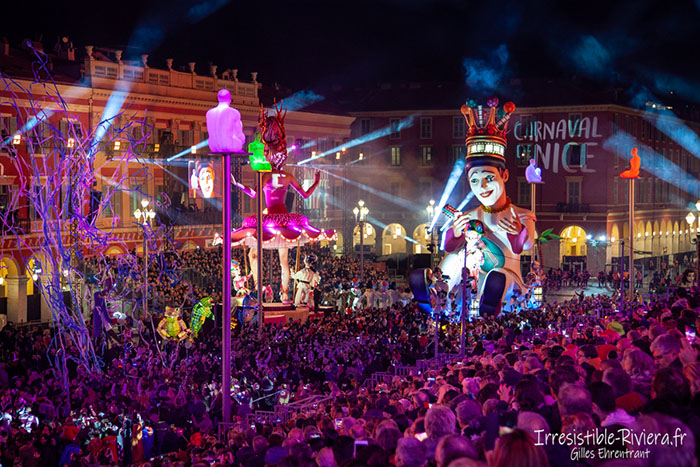 The theme of cinema made the party shine during the end of February, beginning of March 2019. The very successful tanks represented the seventh art and its famous (most french) actors : Belmondo, De Funès, a very successful Charlie Chaplin, Alfred Hitchcock, but also the inevitable and very local "Brice de ... Nice" .... But also politics with a threatening good and ultimately consensual Donald Trump or the French actor Gerard Depardieu, known for his Russian friendships, in the arms of President Putin. Russia whose capital hosts many visitors and which also houses the largest Russian Orthodox Church outside Russia.
The fortnight of the carnival was bathed in sunshine even if the evenings needed to cover well. The tourists, french and foreigneirs answered present in very large numbers. A record attendance that led, security control requires, some delays in the end without gravity. An efficient organization allowed the party to unfold without a hitch and in a very good atmosphere. A special mention to the now famous Tribunes Animation Brigade for its dynamism and enthusiasm, led by twin sisters and choreographers Brigitte and Pascale Audiffren.
The battles of flowers led by beautiful niçoises distributing mimosas and other flowers to the public alternating with the nocturnal Corsos with a very warm and serene atmosphere.

To note an excellent initiative of allowing the free entrance to any spectator disguised from the feet to the head.
As usual, the party ended with the cremation of King Place Masséna, according to the adage "The king died alive the king" highlighting the continuity of power beyond men.
The mayor of the city then announcing the theme of the next edition: the carnival of Nice in 2020 will be the Carnival of Fashion. We already imagine illustrators and carnivals prepare tanks with the effigy of Karl Lagerfeld, Versace, Cardin, Lacroix, Dior, Coco Chanel, Yves Saint Laurent (see the current exhibition "The Asian dream of Yves Saint Laurent" which is dedicated to him until early October 2019 at the Museum of Asian Arts near the Phoenix Park in Nice West) or representative of famous models.

For a better rendering : choose the maximum definition by clicking on the small gear serrated .
https://youtu.be/Hb00STRDWcg