A small nugget of underwater nature preservation to discover in Monaco. Some underwater images and explanations with an interview concerning the history of the place, its rules and operations, its scientific, educational and ecological objectives ...

A wide variety of underwater species easily visible from the beaches

With the help of a simple mask, and even from the shore, you can observe many fish at your leisure, some of which are of good size. The usual sars and saupes occupy the premises, but in greater numbers than on the rest of the Riviera coast. It is common to be able to observe large wolves (sea bass in the Atlantic), sea bream or barracudas. Few of the people of the French Riviera know the places which are nevertheless well worth a visit.

All you have to do is go to Larvotto beach between the Grimaldi Forum and the Salle des Etoiles in the east, places that we also frequent during our photographer services, especially during professional conferences and seminars organized in Monaco.
A beach allows free access to the seabed. The strictly regulated aquatic area prohibits the anchoring of boats and fishing in any way.

The result is certainly reminiscent of the fantastic Port Cros National Underwater Park in the Var. The abundance lets imagine the Mediterranean of our grandparents or seas more abundant than what has become of the Mediterranean Sea over the decades. There are fish in Larvotto that can only be observed in number and size from much deeper in the surrounding seabed. It is not uncommon when going down a bit to see a grouper, a beautiful ray or even a large capon. 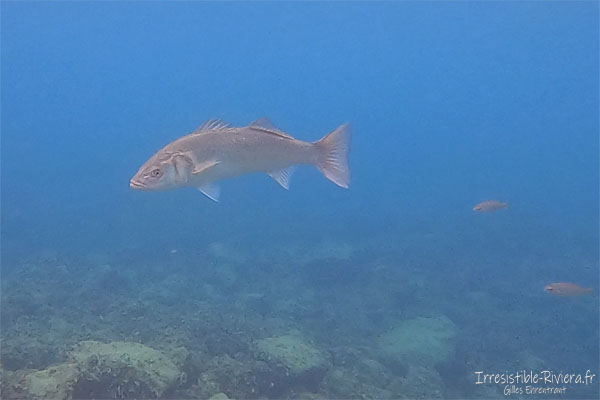 By the way, lovers of three-dimensional evolutions will find on our blog aerial images taken in paragliding over Monaco, Roquebrune Cap Martin from the Mont Gros and Mont Agel site with videos of aerobatics, tandem and precision d 'landing. There are many similarities between underwater and aerial activities (3D, inevitable return to the earth's surface, risk management, specialized equipment, etc.).
Note that the protected marine area of Larvotto geographically covers the Pelagos sanctuary. This triangular area created and managed by Italy, France and the Principality of Monaco's mission is to protect cetaceans, which are numerous in the area. Do not hesitate to visit the official website here.

Underwater funds: a space suitable for children and for underwater discovery 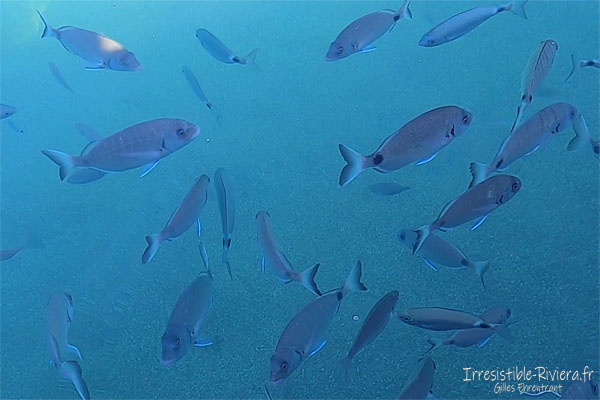 The place will delight children who will be able to easily observe beautiful fish, even while walking. An anti-jellyfish net protects swimmers from stinging incursions. This does not prevent the Larvotto fish from slipping through the cracks and roaming around the swimmers. You can also easily continue the ride on the other side of the net, then behind the dikes to be able to reach areas with more depth. Freediving enthusiasts will have a great time in the middle of this preserved space. Always take care of your safety by keeping a lot of margin compared to your capacities and by practicing with several people.

An area under construction in 2020

It should be noted that the land area of Larvotto is the scene of major works at the time of writing. The beach will soon be topped by a wide and beautiful promenade. Shops, restaurants and stores will also benefit from new, more functional and spacious locations. Lovers of good music will not miss an evening at the Note Bleue, an establishment renowned for its very friendly jazz concerts in the summer sweetness. You may come across, as a bonus, stars who have come here incognito, playing one or two songs out of the blue, casually ...

Important work is also being carried out in front of the Japanese garden and consists of expanding the Monegasque territory by six hectares on the sea. All this should end in summer 2021.

Video of the Larvotto protected submarine area and interview

For a better rendering : choose the maximum definition by clicking on the small gear serrated .
https://youtu.be/2vz0EohIN6A 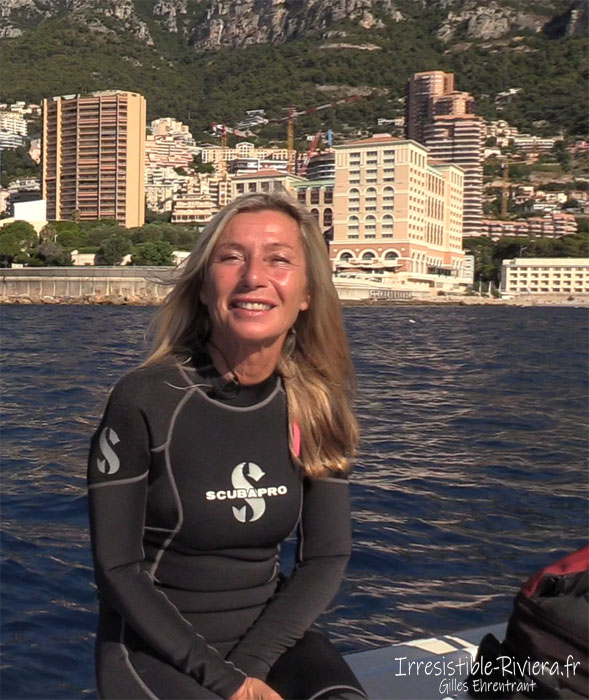 We propose you above some images that we took snorkeling underwater at Larvotto but also an interview with Jacqueline Gautier-Debernardi Director of the Monegasque Association for the Protection of Nature (AMPN) who was kind enough want to answer some of our questions. His expertise, involvement and work allow us to better understand the objectives and operations of this marine protected area.
We asked him to tell us the history of this protected area, details of local regulations, links with the Monegasque authorities but also details about the important scientific work carried out on site; in particular with the Cote d´Azur University and its center of excellence of Nice Valrose, recognized worldwide in the field of marine biology. The protected marine area of ​​Spélugues (the only coralligenous drop off in the Principality), the educational marine area and future projects end this maintenance carried out at sea just in front of the Larvotto beaches, on a day of light to moderate swell as you can see on our images… The fairly sustained wind, altering the sound quality a little at certain times, thank you for excusing us in advance.
Thanks in passing to Stéphane Jamme, biologist and videographer, for providing us with the plans showing the underwater reefs.

The Larvotto submarine reserve, created in 1976 by sovereign order of Prince Rainier III, covers an area of 33 hectares. Note that the Principality of Monaco has 7.5 km of seaside, of which 1.7 km are devoted to marine protected areas. The marine protected area of Spélugues covers a little less than 2 hectares. More information on the AMPN website. 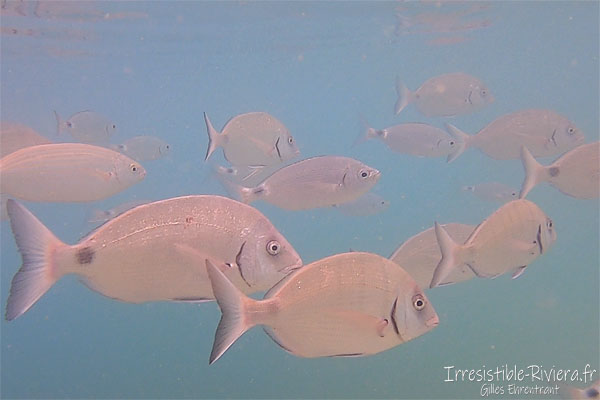 Do not hesitate to visit the website of the AMPN association which is full of very interesting information, especially scientific here http://www.ampn-nature-monaco.com
AMPN's Facebook account is also regularly enriched with qualitative content with photos, videos, reports and press reviews related to the actions of the association.
For example, you can consult summaries on research work on 3D reefs (HYPER3D Project), monitoring of large Mediterranean nacres (February 2020), study of habitat complexity and photogrammetry (ECOSEAS / AMPN laboratory), defense of theses related to underwater life and many other subjects, each more interesting than the last.

We also advise you to visit the professional websites of Dr. Alexis Pey (scientist specializing in the underwater world) https://thalassa-env.com and Stéphane Jamme (underwater photographer and videographer who provided us with the images of the reefs and the installation of Gopro for the counts) http://aquanaute.eu which appear and intervene in our video.

Scientific research in the Larvotto reserve

An example of scientific work carried out in the reserve with a submersible hyper spectral camera making it possible to observe flora and fauna in wide spectra from the "invisible to the visible." A posteriori analyzes make it possible to better understand and identify the different species.

Marine protected areas, at the forefront of nature conservation experiences

Critics will point out that the Principality of Monaco is not necessarily the most virtuous in terms of carbon footprint per capita, the richness of the places probably inducing this ...
While the defenders of the principality will argue that many efforts are being made to reduce this carbon footprint, the Monegasque ecological transition department offers to consult its actions with information and details here: https://energy-transition.gouv.mc/Energy-Transition and here https://en.gouv.mc/Portail-du-Gouvernement/Policy-Practice/The-Environment/Monaco-a-sustainable-town 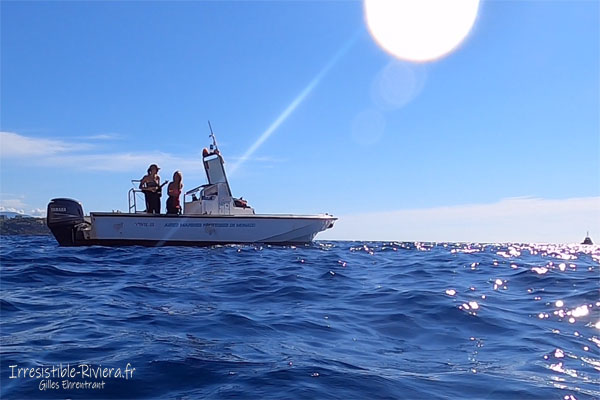 The “Green is the new glam” project, for example, contributes to this ecological ambition by proposing and listing concrete actions (savoring, respecting, moving, feeling, etc.).
The princely family for several generations, as evidenced for example by the visit to the oceanographic museum, is strongly involved in the knowledge and preservation of the oceans.
Prince Albert II supports and participates in numerous actions in favor of the preservation of nature (mission in the Arctic, international stance, partnership and patronage, marine protected areas, etc.), in particular through his Foundation.
We leave to the readers of these few lines to form their own opinion.
For our part, it seems to us that this Larvotto reserve is a fantastic success which allows us to precisely compare the situation between a preserved area and the rest of the coastal area. The scientific, educational but also playful interest of the places participates in and largely anticipates the basic societal movement linked to the preservation of nature, ecosystems and species.

This underwater ecosystem protected by humans would benefit from reproducing very widely all along the French Riviera using other marine protected areas, for example in Cap de Nice, Saint Jean Cap Ferrat, Antibes or Cannes, to the delight of everyone, residents or passing visitors.

We advise you to put on masks, fins and snorkels from the summer (summer 2021 now) without expecting to be in an aquarium. You have to swim, be patient, persevering and be discreet to observe the underwater fauna ...