Gilbert & George: Images of Utopia at the Fernand Léger Museum

Not to be missed until next November 16 at the beautiful Fernand Léger Museum in Biot, the exhibition presenting the triptych "Class War, Militant, Gateway" face to face with the "builders" of Fernand Léger.

Gilbert & George opposite and next to Fernand Léger 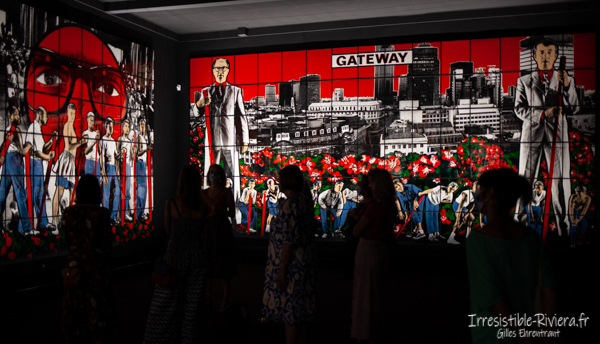 This time they are two famous British visual artists identifiable by their British costumes and a certain taste for originality, provocations, photomontages and bright colors. The painting, stained glass, exhibited at Biot this summer and autumn 2020 is entitled "Class War, Militant, Gateway" dates from 1986 and happens to be the first monumental work of the Anglo-Saxon duo. Loaned by the Louis Vuitton foundation (LVMH, Bernard Arnaud), essential to visit in the Bois de Boulogne in Paris, this highly rated work rarely leaves the collection of Bernard Arnault. With this loan to the national museums of the Alpes Maritimes, this is the first exhibition in a public museum.

The triptych measures ten meters long and almost four high for the "Class war" part, and just under eight meters for the "Militant" and "Gateway" parts. Some colors, blue, red, a little green. Individuals, always men, face the visitors. Urban background in black and white. The impression of finding the industrial universe of Fernand Léger, perhaps less bucolic, romantic. Work overalls, labor forces released or constrained by work. Belonging to communities, characters dressed in the same stick, picket in hand. And these bright colors that electrify the scene. The pleasure of wandering through the details of these large paintings to discover a surprise. A bit like with Quentin Spohn's "Carambolage au marché d'Anvers" at the gallery "Espace à Vente" in Nice but in a more lively style, clearly more pop art.

Face to face between "the builders" of Fernand Léger and the triptych "Class War, Militant, Gateway" of Gilbert and George

The temporary exhibition occupies the large hall upstairs, while the rest of the permanent exhibition changes configuration on both the ground floor and the first floor. The temporary exhibition includes several partitioned spaces alternating explanations inscribed on the walls and works. The first space presents the painting by Léger titled "Freedom I write your name", illustration of the poems of Paul Eluard. Announcer of the tone of the exhibition. The second space presents a film "With Gilbert and George" dedicated to Anglo-Saxon artists directed by Julian Cole, one of their models. The film lasts one hour and forty minutes, its installation here is fully justified but we would have liked to see it also broadcast in the museum auditorium on the ground floor. The room is more spacious and the seats more comfortable. The Chagall Museum in Nice also has a very beautiful projection room where you always have a lot of fun making the visit to the museum last in movies. The evolution of the health situation will perhaps make it possible to offer this screening to the public in more comfortable conditions within a few weeks.

The third box displays one of Leger’s most important paintings, "The Builders" inspired by a photo published in a Soviet magazine. Anchor point, pretext, justification for the presence within these walls of the trio of the London duo. The builders symbolized Léger's communist commitment but also his freedom not to follow the realistic diktats in vogue at the time in the Marxist movement. A parallel to make here with the English "anarcho-conservative" duo which, while displaying the alignment of young workers in the midst of a class struggle, allows themselves a very free and uninhibited style. A small rectangle completes the route before the dark room displaying the triptych. Zone dedicated to explanations describing the course of the authors. 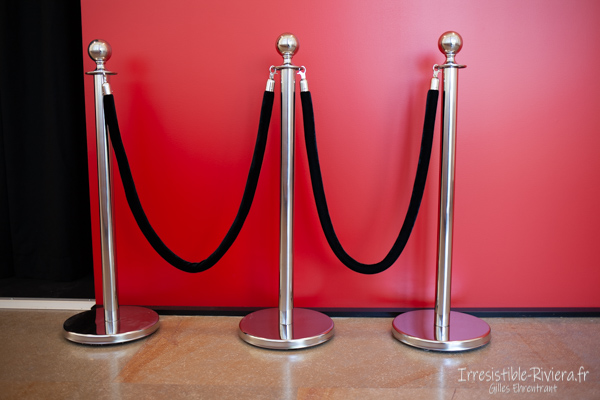 The triptych is not presented aligned as elsewhere but in the shape of a U. The scenes facing each other in a large dark room. This creates an effect probably more enveloping than a longitudinal exposure and enhances the triptych from our point of view. The reconstruction and installation of the painting lasted four days. The scenography of the exhibition is provided by Maddalena Giovannini from the Phoenix workshop.

The curators of the exhibition are Anne Dopffer, general heritage curator, director of the XXth century national museums in the Alpes-Maritimes and Julie Guttierez, heritage curator at the Fernand Léger national museum. We had the chance to enjoy a guided tour of Julie Gutierrez, passionate and fascinating, highlighting to the visitors the bridges ("art for all", stained glass, religion, fight against taboos, darling freedom, contrast, colors… ) between Léger and Gilbert & George. She also met the couple in London as part of the preparation for this exhibition. Thank you to the teams of the national museums of the Alpes-Maritimes for hosting Biot, in particular to Gaidig Lemarie, Magali Passoni-Cartier and Amélie Hug.

An exhibition that awaits you and that will certainly seduce you. The Léger museum in Biot accustoms us over the seasons to a skillful blend of relevance, consistency and lightness. In a bright setting, spacious inside and Provencal outside, the Fernand Léger museum is one of the national museums of the Alpes Maritimes with the Chagall museums in Nice la belle and Picasso in Vallauris. In our opinion, this is one of the must-see exhibitions of this summer season 2020 on the French Riviera.