Fireworks after the attack in Nice in 2016

First fireworks of the National Day three years after the frightful July 14, 2016. A compact crowd presents this Saturday, July 13, 2019. Of joy, emotion and the desire to say: no, we will not give in to fear.

Do not give up on terror

The fireworks of July 14 were canceled for two years, to have again held this eve of national holiday in the capital of the Riviera. As often in Nice, especially during the summer season, a large crowd, colorful and family. Holidaymakers from all over Europe, from all over the world, were walking around waiting for the fireworks to start. A massive presence of security forces. Eyes that cross, between the desire to celebrate a traditionally happy moment and the anxiety to move away this unfathomable misfortune of 2016.

Fireworks of the Renaissance

The theme of this fireworks 2019 was officially that of the "Renaissance" and the "return to life".
Several commemorative events scheduled for Sunday, July 14: Republican parade, philharmonic concert and illumination to heaven, along the Bay of Angels, 86 beams in memory of the victims.

Pulled from barges in front of the US wharf, the show was dazzling: plumes of multicolored lights, Viennese waltzes ...

For a better rendering : choose the maximum definition by clicking on the small gear serrated .
https://youtu.be/tcHf8O6K23o

Stay up, move on

Do not fall into the trap of terrorism, which wants to lead people into panic, blow on the embers, stir up hatred. Without forgiving anything, excusing or forgetting.
Want to remember these words of the song of the partisans, hymn of the French resistance during the Second World War: "Friend, if you fall a friend out of the shade in your place". We will continue to dance at the popular balls of July 14, to party. To stay free, as much as possible.

Despite the deaths, the wounded, psychological trauma, Nice showed this evening of July 13, 2019 a spirit of resilience, built patiently, stubbornly.
"Fall seven times and get up eight." Like our English friends, who suffered the Nazi assaults from heaven, without fainting. And which allowed from their shores a liberating landing, led by the United States, at the cost of heavy sacrifices.
Do not let go of the enemy, fanatical and degenerate, blindly killing young, old, women, men, children, atheists, Christians, Muslims etc ... All absolutely innocent.
That evening of July 2019, the people of Nice, in the name of the whole country, showed again that they would not give in.

We remember this young person, yet so strong, came to gather the next day, on the scene of the tragedy and shattered for a long time in tears, impossible to console. Or this child, at the same time, stunned, shocked, overwhelmed by such human barbarism.
This deafening silence and unimaginable, for several days, on the "Promenade des Anglais" ...
This attack transformed the inhabitants of the city, affected in full heart. Obliged to face. The youngest forced to grow faster than expected.
This fireworks of July 13, 2019 and those after will never be the same as before. Despite the enchantment of the French Riviera and the irresistible atmosphere of dolce vita wandering along the days, a small dose of lightness and carelessness will be missing forever.

Many questions remain unanswered after this attack. Ongoing judicial proceedings, initiated by families of victims, seek to understand. Determine whether breaches of the security obligations (obligations of means and not of results) took place. Who are the possible accountable, besides the Islamist terrorist? Always easy, after, to talk, to mount plans on the comet. Impossible, of course, to ensure 100% security.
Why did harrows, concrete blocks or even vehicles simply block access to the Promenade des Anglais that night?
Attack on the unpredictable ram truck? Unimaginable attack? Unacceptable fatality? Incredible negligence?
Alain Bauer, terrorism specialist explained, during a special show on the W9 channel in July 2019 (01:19): "We can not say we could not anticipate it. That's not true. "
Let's trust justice to tell the truth.
Let's protect ourselves so that such events do not happen anymore.
Let's continue to hit the enemy relentlessly, day and night, wherever he may be.

Keep the head up. Admire the reaction of French society in the great majority. Educated, mature, with a fierce but restrained anger. Admiration for this young man who instinctively grabbed the truck door to stop him, as well as this scooter driver, throwing his two wheels under the truck, trying to slow down the Islamist criminal. Cold blood and professionalism of the police who put an end to the attack.
Thank for their incredible actions rescuers (firefighters, doctors, carers, police etc ...), anonymous present for small and large gestures. True heroes of the Republic who deserve all the legions of honor of the world.
And a part of us all, present physically or by the spirit that night, with the victims, forever in our heart and our memory. 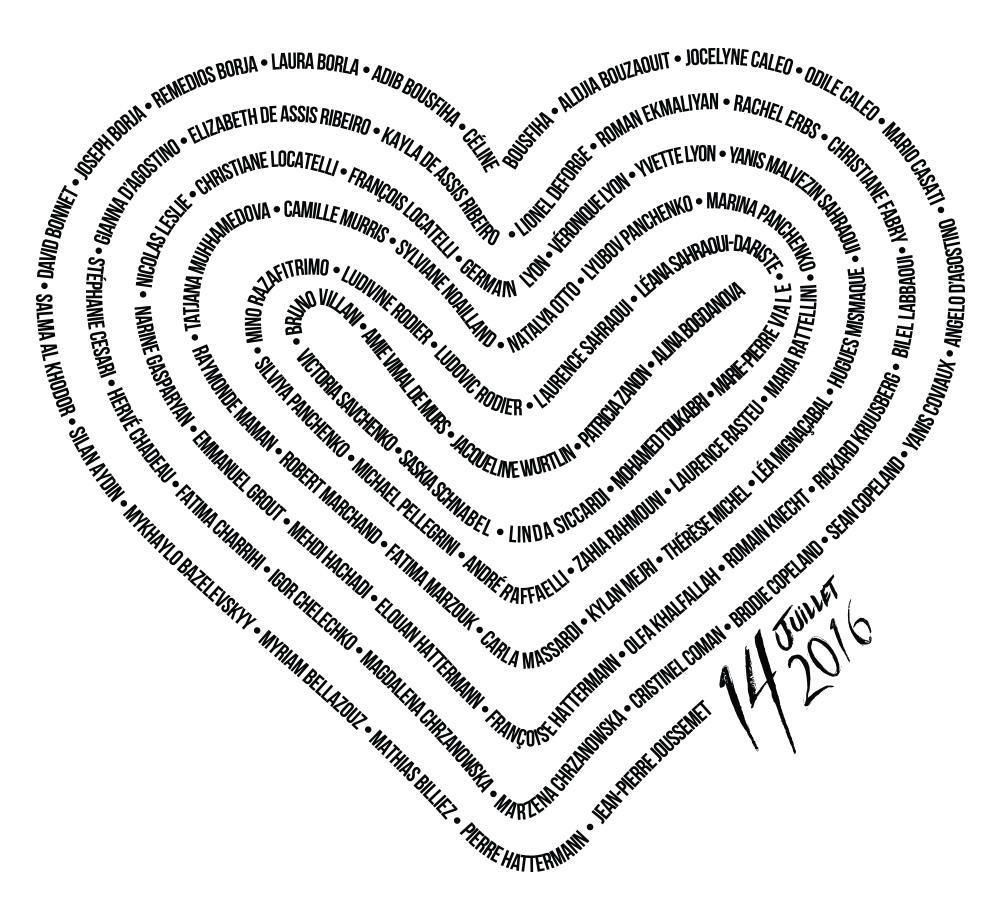