A small chapel, sheltering the blue penitents, is located, almost hidden, under the large vaults, of the Garibaldi place. Some pictures to encourage you to come to discover this place, true treasure of the Nice patrimony.

Invitation to wonder and meditation

Please note the chapel is normally closed for renovation work until May 2020. 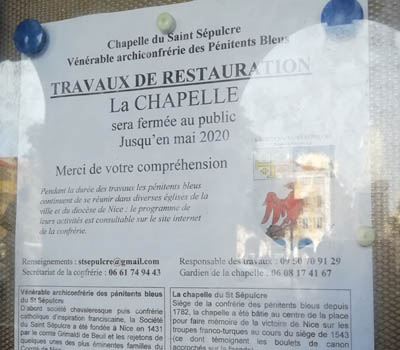 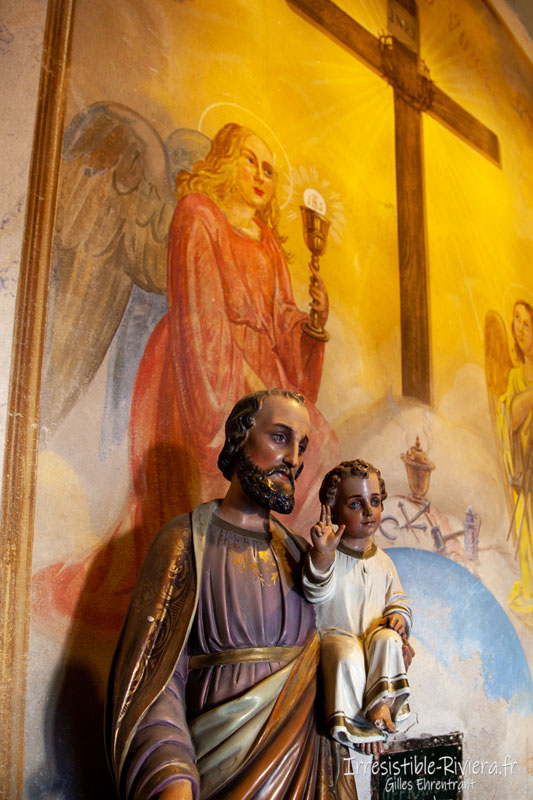 The chapel occupies the southern part of Garibaldi Square. It was built between 1782 and 1784, at the same time as the square, by Antoine Spinelli. Architect who is also responsible for the restoration of the chapel of the Holy Cross, seat of white penitents, in the current old city. This chapel, beginning of 2019, is being renovated because of water infiltration. There are also several other in Nice: the black penitents and the red penitents who respectively have their chapels in the middle and at the eastern end of Cours Saleya.
The chapel of the Holy Sepulcher is on the first floor of the building which has a large balcony. The dukes of Savoy, rulers of Nice, used it as a forum to express themselves in front of the crowd massed on the present place Garibaldi.
The archconfraternity of the blue penitents of Franciscan inspiration, created in 1431, manages and occupies the chapel. We thank them for the welcome they gave us.
It is a society of lay faithful whose mission is to promote the Catholic faith and help the poor. They are mainly dedicated to the care of lepers and the support of orphans. A prior is elected each year to represent the brotherhood. A mass is held in the small chapel every first Sunday of the month, at 18:00. The chapel hosts the community of Polish origin living in Nice for other masses. The website of the fraternity http://stsepulcre.blogspot.com/, very educational, allows to obtain all the required details as well as the brotherhood, the chapel that the religious services.
Many paintings and works of religious art occupy the interior space. In particular, a painting by Louis Van Loo, of which paintings by his son, Charles André van Loo, are on display at the Musée des Beaux Arts.
The visit is usually possible on Tuesday afternoon. The welcome is provided by people, often members of the brotherhood, passionate and passionate, keen on local stories. They will explain to you, for example, the "municipal" peculiarity of the chapel. 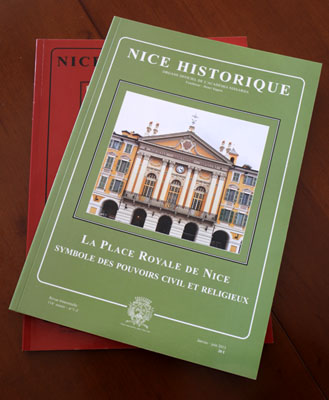 We strongly recommend the consultation of the websites Nice Historique (French Language) http://www.nicehistorique.org and Academia Nissarda http://www.academia-nissarda.org/ as well as their exciting publications (french language). A quarterly magazine entitled "Nice Historique" has been published for more than a century. The authors are all specialists, accomplished historians. Concerning the present place Garibaldi and the chapel of Saint Sépulcre, the edition dated January-June 2013 is dedicated to "The royal square of Nice, symbol of civil and religious powers." The April-June 2007 edition is devoted to "Giuseppe Garibaldi and Nice". Back issues from 1898 to the year 2000 are available online here http://www.nicehistorique.org/pge/. You will find the latest numbers for purchase on the website of the association Academia Nissarda (link above). Good libraries also have the latest issues such as the Massena bookstore or the Jean Jaurès bookstore, still in Nice.

Virtual tours of the chaptel