We recommend you to visit the exhibition devoted to the recent donation by Mr Karlheinz Kronberger of 169 paintings in the city of Nice. Collection partly exposed to the magnificent Jules Cheret Museum of Fine Arts. Small report of the inauguration and some images of the exhibition. 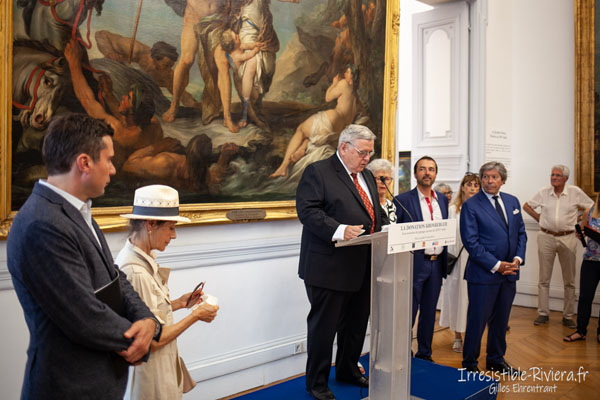 Karlheinz Kronberger, a lover and a regular on the French Riviera, has been collecting paintings representing the French Riviera for many years. These are works called small masters. So skilled painters by the difficulty to classify them in a particular style but also by their relative and lower notoriety compared to the big names of the painting. The 169 new paintings are from the 19th and 20th centuries. They illustrate the Côte d'Azur, mainly in its coastal border in the form of landscapes, but also perched villages of the hinterland (Eze etc ...). Some advertising posters and photographs are also part of the exhibition. A hundred or so of these paintings are therefore exposed to the public, on the first floor of the Jules Cheret museum until November 3, 2019. The donation will then serve as funds to feed future museum projects.

The exhibition of the Kronberger donation

The works occupy 5 rooms of the museum. The first room is interested in painters' treatment of southern light, its colors and representations. The limpidity of the atmosphere in winter and the vibrancy of hues appear here in the open. Very appropriate and well designed explanatory panels guide the visitor, allowing him to better understand the exhibition. Let us note with pleasure explanations also available in the language of Shakespeare for our non-French speaking visitor and tourist friends.
This collection draws an particular image of the French Riviera, a "spirit of Nice". Image of the Riviera largely carved by the wintering, these European populations (Russian, English, Parisianness etc ...), fleeing a few months during the winter gloom of their cities of origin to take refuge at the edge of the Mediterranean, immortalized by the painters here exposed. 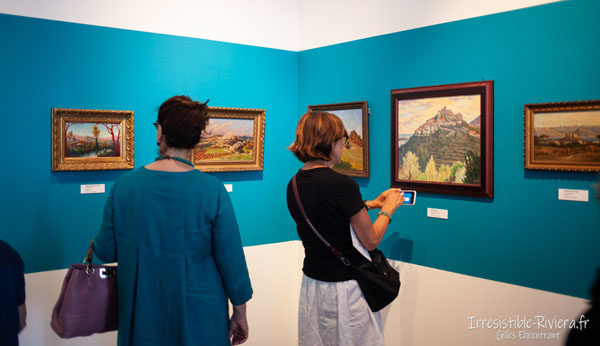 The second room, original, invites visitors to sit comfortably in a kind of small reproduction of the famous literary salon Visconti. Which was Cours Saleya at the corner of the rue Louis Cassin and attracted in the 19th century all the literary intelligentsia European.
The two following rooms, on a blue background, display works of all sizes where lovers of Nice and more generally of the Côte d'Azur will have fun comparing the landscapes and urban developments of the time, to the current situation, a kind of comparative game. All these landscape representations mark a certain distance, quite touristy, in fact with reality. There is not here, or little, representation of the daily life of populations. The admiration, the "subjugation", for the fairy-tale of the places probably masking the daily realities. We are here far from approaches like that of the historian Alain Corbin, who likes to describe the life and sensory realities of each ...
The last and small room is dedicated to tourist promotion posters and some photos, always from the donation. It is almost a question of territorial marketing in the most modern sense. In a certain way, we can join the world of cinema and its posters, read the article on our blog about the Cinemapolis exhibition at the Masséna museum.

The very successful design and organization of this exhibition is the work of Mrs. Michèle Perez, in charge of the collections of the International Museum of Naive Art Anatole Jakovsky.

The opening of the exhibition in the presence of the donor, Thursday, June 27, 2019

Participants were invited to tour the halls with comments from the curator of the exhibition, Mrs. Perez, accompanied by Mr KronBerger. As usual during this kind of event, speeches took place. To begin with that of Mr. Karlheinz Kronberger, who thanked the city several times and with much modesty to accept this gift! Situation quite surreal, unless a detail has escaped us ...
Probably more passionate about his collection and the maintenance of this coherence than by possible pecuniary gains on resale.

Video of the opening evening and speech

For a better rendering : choose the maximum definition by clicking on the small gear serrated .
https://youtu.be/Zfyx5U2DvE8

Gérard Baudoux, a professional lawyer and in charge of museums with Mayor Christian Estrosi, spoke with much fluency, as usual. Not forgetting to mention many times the name of the chief magistrate of the city, he thanked warmly, and with a certain theatricality, Mr Kronberger. Visibly happy, and we imagine, relieved, to know his work, his collection, in such good hands.

The evening ends very nicely on the front of the museum in front of a few "petits fours" and cold drinks, in the presence of the donor, his entourage and the many passionate about art, Nice and local history.