Move with the blue bikes from Nice

Nothing more practical and economical to get around the city! Blue bikes are now part of the identity of the capital of the Riviera. A brief overview of their use and practical tips.

Blue bike : practical and pleasant under the southern sun

A bicycle intended for public use

In the same color as the famous blue chairs, the blue bikes are beefy and provided with a basket, very useful, in the front. Three speeds make it possible to adapt one's effort to the slope, to the wind or to one's energy of the moment. A light system lights up at night. The chain that hangs up the bike at its station also allows to attach it elsewhere and at will.

Rates adapted to all uses

Different formulas allow users to use at really low prices. Pricing is based on a variable term subscription, plus a rental cost from 30 minutes of use. Except for really taking your time, most journeys last less than half an hour, for example to go from one end to the other of the Promenade des Anglais. The price of subscriptions starts at one euro fifty a day, up to 25 euros a year. There is no family subscription at preferential rate. The 175 resorts between Nice, Saint Laurent du Var and Cagnes sur Mer accommodate over 1700 bikes in total.

A mesh dictated by the topography

As everyone knows, the city of Nice sees the Alps literally plunge into the big blue. Several hills thus occupy the places, one is here far from the flat Dutch country. Getting off the city from the bike stations far from the sea is easier than the other way around. Bikes are logically much less often available on the heights especially in the middle and end of the day. Some high-altitude areas are not equipped at all with bike stations like Cimiez, Fabron or Mont Boron.

For a better rendering : choose the maximum definition by clicking on the small gear serrated .
https://youtu.be/9ZAcdlWGqJg 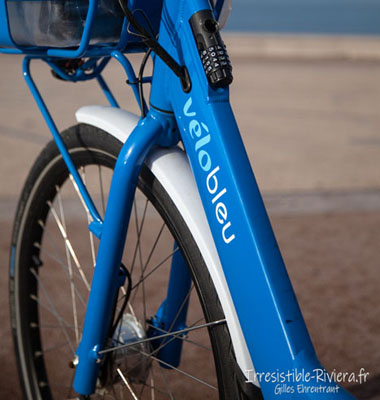 A number of kilometers from the city center has bike lanes either in the bus lanes or next to the cars. Two zones are ideally dedicated to two-wheeled journeys with solid borders ensuring good safety and limiting the untimely parking of other vehicles. The first runs along the green flow between the Théâtre de Verdure and the Musée d'Art Moderne. The second, beautiful, borders the Bay of Angels from the port to the airport. Many projects aim to set up other cycling areas, for example in the eco-valley of the Var plain or along the East West tramway. It should be noted that the municipality subsidizes the purchase of electric bicycles and spends half a million euros for the use of the bicycle. Enthusiasts dream of bike paths, wide and bordered, more numerous going for example from Cannes to Menton by the seaside as well as one or more true north-south axes reserved for bicycles only.

In the end, we advise you as well for your leisure as for your regular displacements the use of the bike in Nice. Driving by the sea, for example in the early morning on the Promenade des Anglais, is always magical. A community of cycling enthusiasts activates online (see links below) Often very militant of the cause of the two wheels you will find for example thanks to the hashtag #velotaf associated with the hashtag # Nice06 on the social network Twitter.
Many shops also offer bike rentals, lighter and pleasant to use.
Cars, scooters and soon electric scooters complete the so-called alternative transport offer. Nevertheless, the automobile remains indispensable for easily carrying heavy loads, many young children or for more peripheral journeys.

Faced with the "not negligible" number of malfunctions, among other things, at the level of the transmission or even the terminals, a small suggestion for the services of the Metropolis Nice Côte d'Azur and Transdev which manages the park Blue bikes: Why not simply create an account on the social network Twitter that would allow users to report to the maintenance service the defective bikes otherwise than by returning the saddle. It would be enough to create a #hashtag of the type #pannevelobleu, to give the number of the bike or the station in question and to describe in a few words the nature of the dysfunction. For example: "#pannevelobleu # 6853 station 020 faulty transmission". This would allow an improvement of the service for almost no cost, besides taking into account the Tweets, to answer them and to intervene. This very smartcity, participative and collaborative approach would involve users in a very probably very effective way!